Congratulations to Ryan Bliss on his commitment to the USNTDP for next season. Ryan is one of the first 6 to officially join next year's class of Under 17s.

Next year's Big Red is expected to have three NTDP alums in Andy Iles, Cole Bardreau, and Gavin Stoick.
Posted by BRP at 9:57 PM 1 comment:

A Bear At Heart 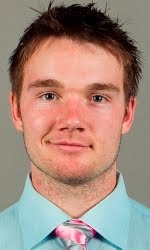 The Chilliwack Chiefs have announced that Mitch Gillam (5'11", 181), a 1992-born goalie has committed to the Big Red for 2013. Mitch recently completed his first year in the BCHL after having graduated from the Berkshire School, where he helped the Bears to playoffs in his two seasons.

The Peterborough (ON) native posted a 3.12 GAA and a 91.0 save percentage this season and was named to the BCHL Interior Conference 2nd-team, along with future teammate Reece Willcox, as well as to the All-Rookie team.

Matt Cimetta picked up a couple of awards at the Western Ontario Conference banquet. Matt was named the Most Outstanding 1st Year Defenseman and also landed on the All-Rookie Team.

Matt helped Sarnia to a first-place finish in the Western Conference (GOJHL) regular season.
Posted by BRP at 7:50 PM No comments: