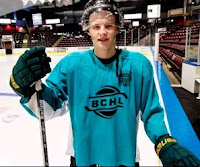 Nolan De Jong (6' 2", 170), a 1995-born blueliner from Victoria, BC, has committed to the Big Red for either 2013 or 2014. Nolan spent last season with the South Island Thunderbirds where he scored 3 goals and added 9 assists in 38 games for the Saanich Minor Midget team. This season Nolan will be playing with the Victoria Grizzlies (BCHL).

Victoria has been very good to Cornell over the past two seasons with three former Grizzlies currently on the Big Red roster: sophomore Dustin Mowrey, and freshmen Madison Dias and Joel Lowry.

Nolan has been shortlisted by BC Hockey and is under consideration to represent Team Pacific at the 2012 World Under-17 Hockey Challenge.