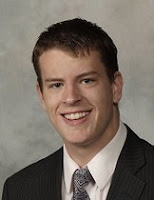 Jacob MacDonald (6'1, 198), a 1993-born defenseman from Brighton, Michigan has committed to Cornell. Jacob currently plays for Waterloo (USHL) and has scored 6 goals and added 15 assists in 34 games for the Black Hawks, which currently places him sixth in scoring among defensemen.

Jacob has twice been named the league's defensive Player of the Week this season.

Jacob becomes the third member of Team Red (with Cole Bardreau and Joakim Ryan) from the final NTDP camp to join the Big Red.