Cornell's roster is currently comprised of 15 forwards, 10 defensemen, and 4 goalies. At 29, the roster is three players above the average size of recent classes (at least for this decade). Given the number of early departures and injuries the team has had to deal with the past few seasons, the staff will undoubtedly welcome the depth and competition this fall should bring.

Here's the breakdown by class and position: 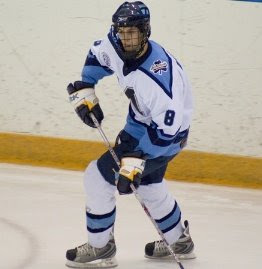 The current podcast of Toronto's A Foot in the Crease features an interview with 2009 recruit, Nick D'Agostino. The interview's about 45 minutes into the program, so you'll have to skip ahead a bit if you don't want to listen to the majority of the show. Oh, and I'm not going to give anything away. If you want to know why Nick's nickname is Dagger, you'll have to check out the show.

Thanks to Mike Bagley of the St. Michael's Buzzers for providing the link.

Photo: A Foot in the Crease
Posted by BRP at 9:57 PM No comments:

Barry Almeida's (Boston College) goal in overtime gave Omaha a 4-3 win over Waterloo in the deciding game of the Clark Cup championship. The win gave Omaha its 7th Clark Cup.

Keir Ross did not play for the Lancers.

Oakville's season came to an end on Thursday with a 6-1 loss to Camrose in the Royal Bank Cup. Braden Birch went scoreless for the Blades.

Drew Palmisano (Michigan State) stopped 28 shots to help Omaha to a 2-0 win over Waterloo on Monday. Keir Ross did not play for the Lancers.

Game three is Wednesday in Waterloo.
Posted by BRP at 9:36 PM No comments:

Oakville bounced back from its second defeat in as many games with a 7-6 win over Humboldt (SJHL) on Wednesday. Braden Birch went scoreless against the Broncos.

The Blades had previously lost Monday's game two, 4-3, to Weeks (Maritime JHL) in overtime. Braden had an assist against the Crushers.

Game four is against Camrose (AJHL) on Thursday.
Posted by BRP at 9:22 PM No comments:

Waterloo continued its hot run through the playoffs with a 4-3 win over Omaha in overtime on Sunday. Keir Ross did not play for the Lancers.

Game two is Monday in Omaha.
Posted by BRP at 9:12 PM No comments:

Oakville began RBC play with a 5-4 loss to the host team, Cornwall, on Sunday. Braden Birch picked up a helper for the Blades.

Game two will be on Monday against Weeks, the Maritime JHL representative.
Posted by BRP at 9:06 PM No comments:

Omaha prevailed in its five-game set with Lincoln when it defeated the Stars, 5-4, on Wednesday. Lincoln had forced a fifth game with a 4-3 win in overtime on Tuesday. Keir Ross went scoreless for the Lancers in the final two games of the series.

The Lancers will face Waterloo in the Clark Cup finals, which begin in Omaha on Sunday.

The Black Hawks advanced to the final round by sweeping Chicago in three games.
Posted by BRP at 10:36 PM No comments: