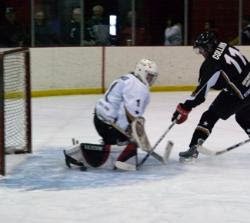 Sean Collins has been selected to the Manitoba JHL's All-Star team. That comes as no surprise. What was a bit shocking, however, was that Sean landed on the league's second team.

For the regular season, Sean finished in second place in the league scoring race, putting up 51 goals and 64 assists in 60 games for Waywayseecappo. Additionally, Sean finished in the top four in four other categories: