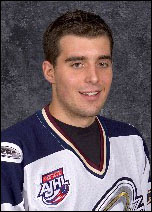 The Spruce Grove Saints have announced that Jordan Kary has committed to Cornell for 2008. Jordan (6' 2", 200), a 1987-born forward from Wataskiwin, Alberta, is the Saints' team captain and has scored 30 goals and added 28 assists this season, good for 20th in the Alberta JHL's scoring race. Jordan has been a strong contributor to Spruce Grove's special teams this year and is 2nd in the league with 15 power play goals. Jordan was selected to play in the season's AJHL's All-Star game, where he scored two goals and picked up an assist.

Spruce Grove is currently in fourth in the AJHL's North Division with a record of 28-16-1-11 (overtime losses).

Jordan will be reunited with former Saint, Ben Scrivens, next season in Ithaca. Welcome to the Big Red, Jordan.