The Binghamton Jr. Senators' Kevin Cole and Matt Pratt competed for Team Canada, while USNTDP members, Jeremy Morin and Jerry D'Amigo competed for Planet USA in Sunday's AHL All-Star Skills Competition. The quartet of Future Stars competed in three events: Puck Control Relay, Fastest Skater, and Shooting Accuracy. The results of the Future Stars' competition were added to the results of the main AHL event, which was won by PlanetUSA, 15-9.

In the opening event, the Puck Control Relay, Kevin was paired against Morin and he fared well against the U17's leading scorer (Morin was recently called up the U18 team). Morin crossed the line ahead of Kevin, however, and the lead was enough for D'Amigo to maintain. PlanetUSA also won the AHL event. 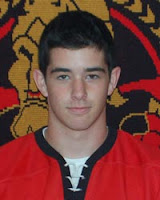 The Future Stars' Fastest Skater event was won by Kevin with a time of 14.739 seconds. Morin, whose nickname is Jet, took second in 15.093. Pratt stumbled a bit, and D'Amigo fell twice during his spin around the rink. Kevin's win picked up Team Canada's first points on the night. The Iowa Stars' Toby Petersen won the main event in 14.001 seconds.