Chris Moulson picked up 2 assists as Penticton defeated Powell River, 6-1, on Sunday. Chris was named the game's 2nd-Star for his effort.

The Vees will host Cowichan Valley on Wednesday.
Posted by BRP at 11:10 PM No comments:

Binghamton won both games this weekend against Hartford, 5-2 and 5-4, to move into a 1st-place tie with the New York Bobcats in the Atlantic JHL's South Division. Kevin Cole picked up an assist in Sunday's game.

The Senators will travel to Hudson, NH, for the Northern Cyclones' Columbus Day Showcase this coming weekend. In NH, the Sens will face Laconia on Friday, Portland on Saturday, and Boston on Sunday.
Posted by BRP at 8:14 PM No comments:

The USHL's Fall Classic wrapped up on Saturday. In one of the early games, Omaha blanked Ohio, 4-0, with Keir Ross going scoreless. Des Moines then got blanked by Green Bay, 3-0, with Locke Jillson also being held scoreless. In the final game involved a Cornell recruit, Cedar Rapids held off Sioux Falls, 4-3, with Vince Mihalek also being kept off the score sheet.

The USHL's regular season gets underway on Friday. Des Moines travels to Lincoln; Cedar Rapids visits Chicago; and Omaha plays host to Tri-City.
Posted by BRP at 7:47 PM No comments:

Vees and Clippers Both Fall By 1

Penticton and Nanaimo both lost by the score of 2-1 on Friday night. The Vees lost to Surrey, which moved to within a point of the Coastal Conference lead; while the Clippers lost to Alberni Valley.

Penticton's Chris Moulson and Nanaimo's Braden Birch were both kept off the scoresheet.

The Clippers' Michael Garman picked up his first loss of the season while stopping 19 of the 21 shots he faced.

Penticton is back in action on Sunday when they host Powell River. Nanaimo is off until next Friday, when they resume their 4 game homestand by playing Powell River.
Posted by BRP at 9:08 AM No comments:

Inside College Hockey has released its rankings of the top incoming players and classes for 2007-2008. Riley Nash is the ECAC's highest ranked recruit, coming in as the 4th-ranked forward.

The USHL's Fall Classic began its second day with Des Moines facing Waterloo. The Black Hawks jumped out to a 5-0 lead in the 1st period, scoring on 4 powerplay opportunities. The Buccaneers came back in the 2nd period behind Locke Jillson's 2 powerplay goals, cutting Waterloo's lead to 6-4. The Bucs picked up another goal in the 3rd to make it a 6-5 game, which was the final score.

Keir Ross picked up an assist to help Omaha defeat Chicago, 5-0 in an early afternoon game. The Lancers' Drew Palmisano (Michigan State) picked up the shutout.

Vince Mihalek, did not play for Cedar Rapids this afternoon, though he had a nice mention in USHR based upon his play on Friday. Vince's RoughRider mates needed 3 goals in the 3rd period to subdue Lincoln, 6-4. David Boehm (UMass) had a hand in all 3 goals for Cedar Rapids in the decisive 3rd period, scoring twice and assisting once.

The USHL's Fall Classic got underway today in Sioux City, Iowa. In the early games: Omaha defeated Green Bay, 6-1, as Keir Ross picked up 2 assists in the Lancers' victory. Des Moines beat Indiana, 2-1, in the early game at the IDP Ice Center, with Locke Jillson going scoreless for the Buccaneers. In the late game, Cedar Rapids scored with less than 2 minutes remaining in the third period to hold off Sioux City, 3-2. Vince Mihalek was kept off the scoresheet in the RoughRiders' victory.

Michael Garman picked up his second consecutive 1st-Star after he stopped all 27 shots, helping Nanaimo to a 1-0 win over Powell River. The Clippers got a first period goal from Brad McConnell and made it hold up, despite 14 power play opportunities for the Kings. Braden Birch went scoreless in the game.

Penticton fell to Salmon Arm, 6-4. Chris Moulson scored the Vees' first goal of the game, and his first of the season, on a power play.

Penticton stays on the road as they travel to Prince George for tonight's game. Nanaimo will visit Surrey on Sunday.
Posted by BRP at 7:20 AM No comments:

Jesse Brown has made the jump to the OHL. Brown was traded from Owen Sound to Kingston this summer and must have found the Frontenacs' offer too good to pass up. It's too bad, Brown would have looked very nice in a Big Red uniform.

Last year, Brown scored 20 goals and added 17 assists in 42 games with the Syracuse Stars (EJHL). He was 2nd on the team in goals scored and tied for 1st in power play goals scored. Over the summer he was selected by Cedar Rapids in the 3rd-round of the USHL draft, and probably would have gone higher if not for those persisent OHL rumors.

BRP wishes Jesse the best of luck in Ontario.
Posted by BRP at 2:37 PM 2 comments: 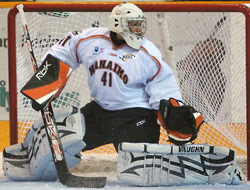 The BCHL has named Michael Garman its Coastal Conference Defensive Player of the Week for his strong performance this weekend. In two games, Michael was outstanding as he allowed 2 goals, stopped 48 of the 50 shots he faced, and was awarded the game's 1st-Star once.

Michael was also named the league's Star Player for Week One, as featured on the BCHL's homepage.

Congratulations, Michael; and a hearty stick salute to the Clippers' organization for a strong opening weekend.

Photo: Nanaimo Clippers and Jamie Penner.
Posted by BRP at 12:34 PM No comments:

The BCHL wrapped up their opening weekend on Saturday night. Nanaimo won their second straight when they defeated Victoria, 3-1. Michael Garman was named the game's 1st-Star after he stopped all but one of the Grizzlies' 31 shots. Braden Birch went scoreless in his second game as a Clipper.

Penticton also won their second game of the weekend, beating Westside, 5-3. Chris Moulson did not play for the Vees.

Next up for the BCHLers: Nanaimo travels to Powell River and Penticton travels to Salmon Arm this Friday.

The Atlantic JHL also opened this week when Binghamton traveled to Walpole. The Express took both games from the Junior Senators, winning 4-2 on Saturday, and 3-0 on Sunday. Kevin Cole went scoreless in his first two games in Junior A.

The Junior Sens are next in action on September 21st when they travel back to Walpole for the Express' Season Opening Atlantic JHL Showcase event.
Posted by BRP at 10:38 PM No comments:

Nanaimo opened their season against rival Alberni Valley and came away with a 5-1 win on Friday night. Michael Garman stopped 18 shots in picking up his first win of the year. Braden Birch added an assist in his first game with the Clippers.

In Penticton, Chris Moulson picked up an assist in his first game in the BCHL, helping the Vees to a 5-3 win over Westside.

Tonight, Penticton visits Westside in their return game, while Nanaimo travels to Victoria for their opening road game.
Posted by BRP at 8:12 AM No comments: 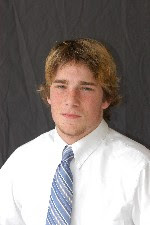 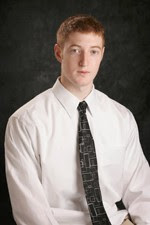 According to the BCHL website, Braden Birch has committed to Cornell for 2008. Braden (6' 3", 185), is a 1989-born defenseman from Hamilton, Ontario. Braden spent last season playing with Stoney Creek (GHJHL) where he scored 10 goals, added 11 assists, and had 86 penalty minutes in 43 games. Braden was also one of the Warriors' top special teams' players, registering 8 goals on the power play. Braden is reportedly a smooth skating player with good puck skills. He is said to make good decisions, passes the puck well, and has strong offensive upside. Braden was drafted in the 3rd-round (43rd overall) by St. Michaels in the 2007 OHL's draft.

Welcome to the Big Red, Braden.

USHR reported yesterday that Connor Knapp has committed to Miami. Knapp (6' 5", 230), a 1990-born goalie, had a very strong season last year in the Empire JHL. Knapp led the Empire league in GAA, save %, and wins; additionally, Knapp was named to the National Conference All-Conference team and was named the league's top goalie.

Knapp is another product of the talented McQuaid program in Rochester, NY. Knapp left McQuaid after his sophomore year and headed to the Junior Bruins' program, where this year he'll move up to the Eastern JHL. Knapp could join another former Knight, Billy Sauer (Michigan), in the CCHA in 2008, although deferring until 2009 is a possibility.

Knapp also visited Clarkson and RPI.
Posted by BRP at 5:58 PM No comments:

Classes have finally begun, and another summer is poised to exit season left. Some of the junior leagues have begun their exhibition schedule. At last, it's ok to think about hockey without feeling a tad bit guilty. To celebrate the impending liberation from the off-season, BRP happily presents the recap of its summer poll: