Sean Whitney helped the Warriors make it to the final game in the Beantown Classic, where they lost to the Saints, 2-0. For the tournament, Sean scored 3 goals and added one assist in 5 games. Sean's 3 goals led all defensemen in the tournament's Pro Division.

Hockey's In The Air

A cold front came down from Canada last night, dropping the evening tempature into the 50s. This morning great cumulus clouds skated across the rich blue southern Finger Lakes' sky. Although the calendar says that the Big Red football team is still early into its preseason camp, the waning days of August also whisper that hockey quickly approaches. So quickly, in fact, that tomorrow brings the beginning of the Beantown Summer Classic, and this week brings the opening of BCHL preseason camps. 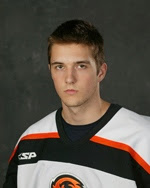 Photo: Omaha Lancers
Posted by BRP at 1:38 PM No comments: