Chris Moulson To The BCHL 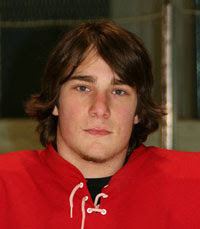 Chris Moulson has signed with the Penticton Vees for the 2007-2008 season. Chris spent last year playing with Listowel in the Mid-Western Junior Hockey League and had a strong rookie season with the Cyclones. Chris was named to the mid-season All-Star game and finished the year among the MWJHL's top-10 scorers. On the year (including playoff games), Chris scored 34 goals and added 40 assists in 54 games.

I had the pleasure of coaching Chris at Our Lady of Mt Carmel in 2004-05 and 2005-06. Chris was instrumental in leading our team to a 3rd Ontario Prov Gold Medal. In 38 games Chris posted 99 points and led all participants in scoring during OFSAA 2006 in Fort Francis. Chris has great vision and his will to win is second to none. Good luck with the season Chris talk to you soon. Coach Gasparini

Coach, thanks for sharing the kind words on Chris and for some background. I'm looking forward to seeing Chris in Red next season.