Nash To The Oilers 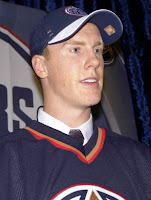 Riley Nash was selected by the Edmonton Oilers with the 21st pick in the first round.

Center appears to be the deepest position in the Oilers' organization, according to Hockey's Future, which should allow Edmonton to be patient with Riley. Given Riley's age (Riley's the youngest member of Cornell's incoming class, and is the 6th youngest player selected in this year's first round) there would seem to be no need to rush his development. Hopefully, Edmonton will give Riley a couple of years, at least, to mature physically and round out his game.

Riley was the only member of the ECAC to be selected in the opening round.


* Please visit The Big Red What for a list of Cornell's draft history.