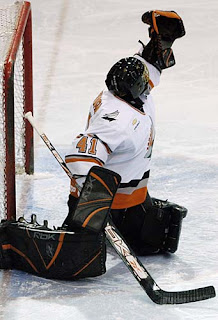 Michael Garman (left) went head-to-head with the BCHL's hottest goalie, Nick Olynyk, and led the Clippers to a 2-1 double-overtime win last night in Nanaimo. Michael was named the game's 1st-Star after stopping 35 shots in over 83-minutes of play. Mike Devin picked up an assist on Kyle Ostrow's (Denver) goal in the first period. Vernon put 13 shots on goal in the second period, scoring their only goal on a short-handed opportunity midway through the period. Taylor Langford scored the game-winner, after Nanaimo outshot Vernon, 20-4, during the two overtime periods

Joe Devin was kept off the scoresheet.

Nanaimo leads the best-of-seven series 2-0. Games three and four are in Vernon on Wednesday and Thursday.