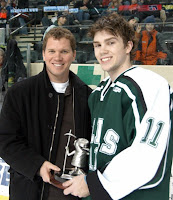 Locke Jillson (5' 10", 160), a 1988-born forward out of Dallas, Texas, has committed to Cornell for 2008. Locke spent this season playing with the Dallas Stars AAA team and will probably spend the 2007-2008 season playing in either the USHL or the BCHL. Locke sounds like a consumate team player, having turned down an opportunity to move to the USHL this year, choosing to spend the season trying to help the Stars win the National Championship. Dallas, after winning the state championship, was recently upset in the regional tournament. On the year, Locke was named the tournament MVP in the prestigious Hull Kiwanis event and the Most Outstanding player in the Little Caesars North American Hockey Showcase (see photo).

Welcome to the Big Red, Locke.

Thanks to ugarte for the tip on this story.
Posted by BRP at 4:04 PM