Nanaimo picked up a weekend sweep by taking both games against Alberni Valley. Mike Devin scored the game-winner on Friday at the 18:06 mark of the 3rd period on a powerplay as the Clippers beat the Bulldogs 5-4. On Saturday, the teams moved to Port Alberni for the rematch and the Clips won a wild 7-4 game. Nanaimo scored the first 6 goals before the Bulldogs ripped off 4 in a row to make it a game. Matt Pinder then scored the Clippers' 7th goal, 9 minutes into the 3rd period to finish off the Dogs. Michael Garman stopped 21 shots in the 1st period on his way to the win. For the game, Michael stopped 30 shots. Joe Devin went scoreless on Friday and did not play on Saturday.

Patrick Kennedy is still on the mend and out of the lineup for St. Thomas.

Jacob Johnston went scoreless in his two games this past week as Sudbury split their games, losing 3-2 to Abitibi and winning 3-1 at the Soo Thunderbirds.

Sudbury is back in action Wednesday against Manitoulin.
Posted by BRP at 9:09 PM No comments:

According to someone close to the WCHA scene, Riley Nash (6' 1", 170), a 1989-born forward playing with Salmon Arm (BCHL) may have eliminated Cornell from his list of finalists. Nash was recently in Denver for the Pioneers' series against Niagara and reportedly had a positive visit. Elsewhere, word had been that Nash had cancelled a trip to Michigan, so it may be he is focusing his attention on the two remaining schools out west -- Denver and North Dakota.

Camrose (Alberta JHL) continues with their #1 ranking in the weekly Canadian Junior A Hockey Leagues' top-15. The Kodiaks are now 39-8-1 and hold a 25-point lead in the AJHL's South Division.

Photo: Alberta JHL
Posted by BRP at 12:00 PM No comments:

The Nanaimo Clippers announced that Matt Irwin (6'1", 190), a 1987-born defenseman, committed to UMass. Irwin leads the Clippers in powerplay goals, as well as the BCHL (among defensemen). Irwin will be a solid addition to the Minutemen.

Cornell was listed earlier as one of Irwin's finalists.

According to Chris Heisenberg's site, Eric Kroshus (6' 1", 190), a 1989-born forward playing with Camrose (AlbertaJHL) has committed to Harvard. Cornell, Dartmouth, and Princeton were other schools he had reportedly considered. Kroshus, who'll be joining Harvard in 2008, is having a strong rookie season in Alberta.

This is another nice addition to Harvard and is the second player in a week to select the Crimson over Cornell. Alex Killorn (Deerfield Academy) committed to Harvard for 2008 late last week; Killorn reportedly had his pick of the Ivies and Hockey East heavyweights.
Posted by BRP at 7:39 AM No comments:

Camrose (Alberta JHL) held off Nanaimo and retained their #1 ranking in the weekly Canadian Junior A Hockey Leagues' top-15. The Kodiaks split their two games this past week and are now 37-7-1 (including another loss last night), and hold a 24-point lead in the AJHL's South Division.

Photo: Alberta JHL
Posted by BRP at 11:05 PM No comments:

Nanaimo continued their hot play with a weekend sweep of second place Victoria. The Clippers won at home on Friday, 4-2, and at Victoria on Saturday, 6-3. Mike Devin had a strong weekend with a goal and three assists. Michael Garman also played well on Saturday, stopping 30 shots on the road to pick up his 19th victory. Michael's biggest save of the game may have been when he stopped Tyler Bozak (Denver recruit) on a penalty shot -- Bozak leads the BCHL in scoring.

The Clippers play Victoria again on Friday and then host Merritt on Sunday.

Michael Garman is scheduled to visit Ithaca this Friday for the game against Yale.

In the WOHL, St. Thomas continues to struggle as Patrick Kennedy continues to recover from mono. The Stars lost to Strathoy, 8-3, and to Tecumseh, 8-2, this weekend.

Sudbury hosts the second place Soo Indians on Wednesday and travel to Manitoulin on Thursday in the NOJHL.
Posted by BRP at 10:43 PM No comments:

NHL Central Scouting has released its mid-season rankings and the following players with a Big Red connection made the list: 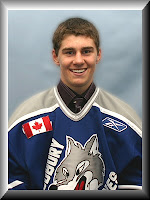 Camrose (Alberta JHL) continues to be ranked #1 in the weekly Canadian Junior A Hockey Leagues' top-15. The Kodiaks won all four of their games since the last poll and are now 36-5-1, holding a 25-point lead in the AJHL's South Division.

Photo: Alberta JHL
Posted by BRP at 11:49 PM No comments:

Last weekend Nanaimo struggled on their trip through the Interior Conference dropping all three games to the conference's best teams. This past weekend Nanaimo exacted a measure of revenge beating Vernon 2-1 and Trail 5-3. Mike Devin picked up an assist against Trail while being named the game's 2nd-Star. Michael Garman picked up the win against the Smoke Eaters stopping 15 shots in his only action of the weekend. Joe Devin went scoreless in his two games.

Nanaimo remains in first place in the Coastal Conference, 9 points ahead of Victoria. The Clippers and Grizzlies will meet three straight times beginning Friday.

In the WOHL, Patrick Kennedy remains inactive as he recovers from a bout of mono. In his absence the Stars split their most recent games, beating Petrolia 5-4 and losing to Tecumseh 4-2. The loss to the Chiefs dropped St. Thomas into fifth place, two points behind Tecumseh.

Connor Knapp (Rochester) who left McQuaid High School last year after his sophmore year was named to the National Conference team. Knapp (6' 5", 205) is a 1990-born goalie who is 2nd in the league, allowing 1.71 goals per game and stopping 92.7% of the shots faced. Knapp plays for the Boston Junior Bruins.

Nanaimo broke their 3-game losing streak by defeating Surrey last night 6-1. 2008-commit Michael Garman stopped 17 of the 18 shots he faced for his 17th win of the season. Joe and Mike Devin went scoreless against the Eagles.

Nanaimo remains home this weekend for a game against Vernon on Friday and one against Trail on Sunday.
Posted by BRP at 5:35 PM No comments:

Happy New Year to one and all...

Here's a recap of our last poll:
"Where would you like Cornell to spend more time recruiting?"