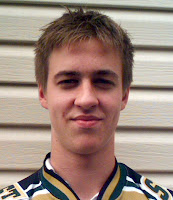 Patrick Kennedy was selected to the WOHL All-Star team as announced by the league on Tuesday. The All-Stars will play a pair of games against the Golden Horseshoe League All-Stars on December 28th and 30th.

Patrick got back on the scoresheet this week with a goal and an assist against London, and another goal against Tecumseh. The Stars won both games and moved back into 3rd place, though still trailing St. Marys by 7 points with 3 games in-hand.

The Stars host Leamington on Sunday.