Camrose (Alberta JHL) continues to be ranked #1 in the weekly Canadian Junior A Hockey Leagues' top-15. The Kodiaks are currently 26-3-1 and have a 17-point lead in the AJHL's South Division.

Photo: Alberta JHL
Posted by BRP at 9:45 PM No comments:

In British Columbia, Nanaimo had another busy weekend playing 3 games in 3 nights. The Clippers opened the weekend with a 4-1 loss to Cowichan Valley on Friday. They bounced back on Saturday when they travelled to Surrey and came away with an 8-4 win. The Clips finished on Sunday with a 5-5 tie against Penticton. Mike Devin picked up an assist on Sunday for his only point on the weekend. Mike had to sit out the game against Surry as he served a suspension for instigating a fight against Cowichan Valley. Joe Devin remained sidelined with an injury.

In the Western Ontario Hockey League, Patrick Kennedy had a quiet weekend as well, going scoreless in the Stars' two games. On Saturday St. Thomas fell to Strathoy, 4-2, before coming back on Sunday to defeat Petrolia 6-5 in OT.

This coming weekend Nanaimo has a home-and-home with Cowichan Valley on Friday and Saturday, while St. Thomas takes on first-place St. Marys on Sunday.

St. Thomas came back from an early 2-0 deficit to defeat Sarnia 6-4 this afternoon at home. Patrick Kennedy scored a goal and picked up a helper for the Stars. Patrick was awarded the game's 3rd-Star for his effort.

The Stars are now tied with Strathroy for second in the WOHL. The Stars will visit Strathroy on Saturday and then travel to Petrolia on Sunday.
Posted by BRP at 6:59 PM No comments:

Nanaimo finished off their road trip by winning their 3rd game in 3 days on Saturday. For the trip, the Clippers outscored their opponents by a combined 21-7. The Clippers began the trip against Merritt, winning 5-2. The next night the Clippers scored 8 goals in the 3rd period to beat Salmon Arm, 12-4. The trip ended by defeating the Westside Warriors, 4-1. Mike Devin picked up 2 assists over the trip, while Joe Devin did not play.

Nanaimo gets a well-earned few days off before facing Cowichan Valley on Friday at home.
Posted by BRP at 3:00 PM 2 comments:

Patrick Kennedy scored a goal and had 3 assists to help St. Thomas defeat Chatham on Friday by a score of 6-2. Patrick had a hand in the Stars' first 3 goals of the game, including his game-winner early in the 2nd period. For his effort, Patrick was awarded the game's 1st-Star. It should also be noted that Matt Hackett had 52 saves for the Stars.

The Stars are home on Sunday against Sarnia.
Posted by BRP at 11:28 PM No comments:

St. Thomas jumped out to a quick lead on Thursday, scoring barely two minutes into the game on a goal by Chris Ferguson. It was pretty much all Sarnia after that, however, as the Blast scored the next 6 goals on their way to a 10-3 win. Patrick Kennedy picked up a goal for the Stars, ending the scoring at the 18:22 mark in the 3rd.

The Stars will host Chatham on Friday.
Posted by BRP at 10:59 PM No comments:

The Canadian Junior A Hockey Leagues' weekly top-15 was released with Camrose (Alberta JHL) still #1. The following team (with known Cornell commitments) is ranked this week:

Photo: Alberta JHL
Posted by BRP at 10:39 PM No comments:

Wow, just moved Blogger to their new beta version. First impression: there was a bug that had been preventing me from seeing any comments posted. I apologize to each of you -- I really wasn't ignoring you; I was simply blinded for some reason. I'll try to get to some of them tonight. There's some really good stuff in there...and here I thought nobody was reading the blog.
Posted by BRP at 1:54 PM No comments:

Tonight's game between Nanaimo and Burnaby was cancelled due to high winds affecting ferry service. The Clippers are scheduled to travel to Merritt tomorrow night.
Posted by BRP at 8:49 PM No comments:

Nanaimo began a difficult stretch of games by winning 2 out of 3 this weekend. The Clippers took the first 2, beating Burnaby 5-3 and Surrey 6-4, before losing on Sunday to Langley, 5-3. Mike Devin picked up an assist in the win over Burnaby, and scored a goal in the loss to Langley. Mike was also awarded the game's 3rd-Star against Langley. Joe Devin went scoreless in his only appearance against Burnaby.

The Clippers get two days off and then play 4 straight games on the road, beginning with a rematch against Burnaby. If you weren't counting that's 7 games in 9 days. I can't even think about how crazy that is.
Posted by BRP at 3:55 PM No comments:

Chatham held on to win the rubber match against St. Thomas on Sunday, 8-6. After falling behind 5-3 in the 3rd period, the Stars were able to climb within one goal three times before the Maroons put the game away with an empty-netter with 13 seconds remaining in the game. Patrick Kennedy scored 2 goals and added a helper in the loss.

The Stars travel to Sarnia on Thursday to take on the Blast.
Posted by BRP at 3:30 PM No comments:

For the week ending November9th, the following team (with known Cornell commitments) is ranked in the Canadian Junior A Hockey Leagues' top-15 (previous ranking):


Camrose (Alberta Junior Hockey League) continues with their #1 ranking. The Kodiaks are currently 18-2-1 on the season.

Photo: Alberta JHL
Posted by BRP at 11:39 PM No comments:

St. Thomas scored twice in the final four minutes of the game to put Chatham away, 4-2, on Friday night. Patrick Kennedy celebrated his first game as a Cornell recruit with a goal and an assist.

Note: It was a good day for the Kennedy brothers. In addition to Patrick's solid evening, brother Michael scored the game-winning goal with 1:33 remaining as the Big Red defeated Harvard 3-2 at Lynah Rink.

The Stars return to action on Sunday as they travel to Chatham.
Posted by BRP at 11:22 PM No comments: 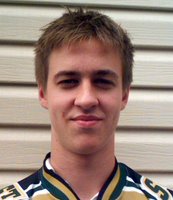 For the week ending November1st, the following team (with known Cornell commitments) is ranked in the Canadian Junior A Hockey Leagues' top-15 (previous ranking):


The Camrose Kodiaks (Alberta Junior Hockey League) continue with their #1 ranking. Current Big Red players Dan Glover and Kevin McLeod are former members of the Kodiaks (according to the Alberta JHL's website).

Photo: Alberta JHL
Posted by BRP at 10:57 AM No comments:

Nanaimo finished up a cozy homestand by winning their fifth straight game on Friday night. Joe Devin assisted on Russell Goodman's game-winning goal early in the 3rd period, as the Clippers went on to defeat Westside 4-2. Mike Devin went scoreless in the game.

Nanaimo will spend most of the next few weeks playing on the road, beginning with a game against Conference-leading Victoria on Tuesday.
Posted by BRP at 10:02 AM No comments:

David Brownschidle (5' 11", 184), 1989-born, has committed to Brown. Brownschidle, a forward, is currently playing for the Tri-City Storm in the United States Hockey League. Brownschidle was almost included in this month's Puckhead Poll, but the thinking was that he was being recruited for 2008. Brownschidle, who has 3 uncles that played D1 hockey (one for Boston University and two for Notre Dame), was recently given a B-rating by NHL Central Scouting. Brownschidle is considered a tough two-way player and should be a solid contributor for the Bears. Brownschidle also considered Cornell, Dartmouth, Princeton, and Yale.

Reported by USHR
Posted by BRP at 8:15 PM No comments:

Reader beware: BRP attempts to aggregate as much information as possible. Nothing truly confidential should ever knowingly appear, rumor and guesswork, however, may be fair game.

At this point, it looks like the Big Red is still looking for 1 forward/center and 1-2 blueliners to fill out the incoming 2007 class. That assumes, of course, that no one leaves the program early. Given what's happened the past few years, the staff could choose to bring in a couple of additional players for insurance. The class should start to finalize as the various junior leagues conclude play.

As always, please remember that whether there is interest on Cornell's part, or on a student's part, is unconfirmed in most cases. Some of the players listed have been reported to either have interest in or be of interest to Cornell, while others are strong students who have expressed interest in some of the Ivies and would therefore be logical candidates or simply come from traditional recruiting areas and represent a working wish list.

Note: Some of this information is provided by Cornell fans near and far. Thank you & please keep the info coming. After all, we're just a bunch of Puckheads looking for a Big Red fix.

The season is underway and things on the recruiting front should begin to pick up soon.

Here's a recap of our last poll:
"Which freshman will have the greatest impact this year?"