May is upon us. Lynah's renovation continues and it's on its way toward a new season.

Here's a recap of last month's poll:
"Which school would you most like to see Cornell schedule home-and-home?"

After trading one-goal wins in Games 3 and 4, Des Moines and Sioux Falls move to South Dakota for the deciding game on Monday night. The Buccaneers' won Game 3 on Kyle Okposo's goal in overtime, with Troy Davenport stopping 22 of the Stampede's 24 shots. In Game 4, Sioux Falls scored the game's first two goals and held off the Bucs for a 2-1 win to even the series. For the second straight game, Troy Davenport stopped 22 of the 24 shots he faced.
Posted by BRP at 8:19 PM No comments:

Sioux Falls defeated Des Moines 5-2 on Wednesday night to even the best-of-five series at one. Andreas Nodl scored a hat trick for the Stampede. Troy Davenport stopped 22 of the 27 shots he faced, while playing 48:22 in the game.

Game Three is in Sioux Falls on Friday.
Posted by BRP at 10:06 PM No comments: 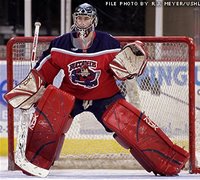 In Des Moines, Troy Davenport and his Buccaneer mates continued their splendid postseason play defeating Sioux Falls 2-0 to open the best-of-five Clark Cup Championship series. Troy stopped all 20 shots, including 10 in the third period, as he was awarded the game's 1st-Star.

Game Two is in Sioux Falls on Wednesday.

According to the NHL's Central Scouting Service, the following Cornell-bound recruits are ranked (with projected round):

For the Season, Justin Krueger:
Posted by BRP at 9:57 AM No comments:

Penticton evened their series with Burnaby on Friday, beating the Express 3-1 in Game Four. Justin Krueger picked up an assist in the win.

The series moves back to Penticton on Sunday.
Posted by BRP at 8:14 PM No comments:

Troy Davenport stopped 35 shots to help Des Moines to a 5-3 win over Cedar Rapids and a sweep of the defending Clark Cup Champions. For his efforts, Troy was awarded the game's 2nd-Star. In the three games against the RoughRiders, Troy picked up a 1st & 2nd-Star, gave up 2.00 goals per game, and stopped 94.7% of shots on goal.

In Sioux Falls, Lincoln spotted the Stampede 3 first period goals before falling 5-3 and seeing the series tied up 1-1. Justin Milo scored a goal for the Stars. The series moves to Lincoln for Game Three tonight.
Posted by BRP at 2:46 PM No comments:

Research on Ice is reporting that 2007 Cornell recruits Joe and Mike Devin will be playing for the storied Nanaimo Clippers in the BCHL next season. Good scoop.

Currently, the Big Red are scheduled to have 6 former Clippers on their 2006-2007 roster.

Des Moines took a 2-0 lead in their series with Cedar Rapids, defeating the RoughRiders 3-1. Troy Davenport continued his outstanding play stopping 39 shots and picking up the game's 1st-Star.

Lincoln gave up the game's first two goals before ripping off 5 straight markers to take Game 1 from Sioux Falls. Justin Milo did not appear in the scorer's sheet.
Posted by BRP at 11:11 PM No comments:

Penticton got a goal from Michael Guzzo in overtime to defeat Burnaby 4-3 and even their series at one. Justin Krueger was kept off the scoreboard in Game 2.

The Express will host Game 3 on Thursday night.
Posted by BRP at 10:59 PM No comments:

Penticton Falls in Game One

Burnaby scored on a powerplay at 12:27 of the third period and then added an empty net goal for a 4-2 win over Penticton on Monday. Justin Krueger picked up an assist for the Vees and was awarded the game's 3rd-Star for his efforts.

Game 2 in the BCHL's Fred Page Cup is tonight in Penticton.
Posted by BRP at 11:30 PM No comments:

Round two got underway in Cedar Rapids tonight with the Bucaneers pulling out a 3-2 win in overtime. Troy Davenport continued his strong play, turning away 34 of the RoughRiders 36 shots in 61:22 of play.
Posted by BRP at 11:12 PM No comments:

Lincoln defeated Omaha 1-0 on Saturday to move into the second round. Justin Milo went without a point in the win.

Lincoln will meet Cedar Rapids in the next round, and Des Moines will match up with Sioux Falls.
Posted by BRP at 9:11 PM 2 comments:

Lincoln was unable to hold off Omaha on Friday night, giving up four goals in the third period, as the Lancers pushed the first-round series to tonight's deciding game. Justin Milo picked up an assist in the Stars' losing effort.
Posted by BRP at 11:51 AM No comments:

Penticton defeated Salmon Arm 10-6 on Friday night, advancing to the BCHL's Fred Page Cup Finals. Penticton scored the game's final four goals to win going away, in what had been a tightly contested series. After splitting the first two games, with each team winning by one goal, the Vees won Game Three 2-0 and Game Four 5-4. In the five games, Penticton's Justin Krueger had a goal and an assist, while picking up only two penalities. Salmon Arm's Brendon Nash, meanwhile, had an assist and 18 minutes in penalities in the five games.

Brendon Nash: For the Season (including tournaments):
Posted by BRP at 11:14 AM No comments:

After coming up one goal short in Game Five, Spruce Grove was no match for Camrose in the deciding game as they were shutout 4-0 by the Kodiaks. Ben Scrivens had 26 saves in the Saints' 2-1 loss last Thursday and then stopped 19 shots in the series finale.

Ben Scrivens: For the Season (including tournaments):
Posted by BRP at 10:13 PM No comments:

The last time a Cornell goalie took to the ice at the Resch Center in Green Bay, hockey fans saw one of the great goalie performances in NCAA tournament play -- well, actually, they saw two as both Brian Elliott and David McKee were wonderful. It was, however, David's 59-save performance that night in Wisconsin that served as his farewell to the Big Red. But as he skated off into Cornell's rich history, another prepared for his chance to replace the legend.

With his team up 2-0 in the best-of-five series, Troy Davenport took to the same ice that served his former mentor so well one week earlier. Sixty minutes later, Troy and his Des Moines mates had a 3-2 victory over Green Bay and were heading home with a series sweep. Troy stopped 23 of the 25 shots he faced, and for the series stopped 95.5% of the Gamblers' 67 shots.

Omaha, meanwhile, defeated Lincoln 3-1 to extend their series to at least a fourth game. Justin Milo went pointless in the game.
Posted by BRP at 10:18 PM No comments:

Going into Game Three tonight in Samon Arm the Silverbacks and Vees are 1-1 and things couldn't be much closer. Penticton won the first game 2-1 while Salmon Arm won the second game 3-2 in overtime. Neither Justin Krueger nor Brendon Nash have picked up a point thus far, though Brendon's younger brother, Riley, scored the game-winning goal in the Silverbacks' overtime thriller.
Posted by BRP at 9:59 PM No comments:

For the week ending April 2nd, the following teams are ranked in the Canadian Junior "A" Hockey Leagues' top-15 (previous ranking):


The Pembroke Lumber Kings (Central Junior Hockey League) continue to be ranked #1.
Posted by BRP at 9:52 PM No comments:

On the day Cornell fans officially heard the news of David McKee's early departure, one of the young men who will compete for the honor of being the next Big Red goalie took to the ice in Des Moines, Iowa, and reminded the Lynah Faithful that October is not so far away. Troy Davenport helped his Buccaneer mates to a 2-0 lead in their first-round series with Green Bay by stopping all 17 shots on goal in the Bucs 6-0 win. For his effort, Troy was awarded the Game's 2nd-Star. Troy has played the first two games in the series, and given the Bucs pattern of giving (roughly) one out of three starts to New Hampshire-signee, Brian Foster, it'll be interesting to see who goes tonight as the series moves to Green Bay.

In the USHL's other series featuring a future member of the Big Red, the Lincoln Stars also skated off to a 2-0 start in their first-round matchup with Omaha, beating the Lancers 5-2. Lincoln's Justin Milo picked up an assist in the win.
Posted by BRP at 8:17 AM No comments:

Welcome to April. Another season is over. Let the countdown begin...

Here's a recap of last month's poll:
"Which school would you like to see add a Division One hockey program?"