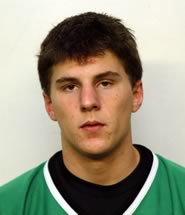 The New York Bobcats won their first Atlantic Junior Hockey League Championship this past week, defeating the Boston Bulldogs 9-6 in the title match. Playing without the league's Co-MVP, Tony Romano, who injured his shoulder early in the first period, the 'Cats scored the game's final five goals for the win. In the previous night's semifinal win over Hartford, Tony scored a goal and added an assist in helping his team to the final.

For the Season (including tournaments):
Posted by BRP at 12:50 PM