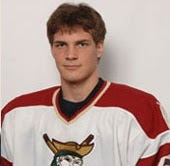 Chris Heisenberg is reporting that Cornell has received a commitment from Mathieu Brisson (6' 1", 187), a 1992-born defenseman from Quebec for the 2010 season. Mathieu currently plays for College Charles LeMoyne (Quebec Midget AAA) and was a 2nd-round selection of the PEI Rocket (QMJHL), in the same draft in which the Rocket selected former recruit Jordan Escott.

Mathieu currently has a line of 24-7-16-23, which leads all defensemen in scoring in the QMAAA. Mathieu is also a member of Quebec's U17 team.

Welcome to the Big Red, Mathieu.