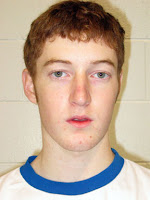 Braden Birch has been moved from Drayton Valley (Alberta JHL) to the Oakville Blades (OPJHL). Oakville is currently in first place in the West Division with a record of 29-4-0-3 (3 overtime losses). The Blades are ranked 14th in the CJAHL's most recent list.

Braden never played for Drayton Valley after being traded from Nanaimo (BCHL). After the trade, Braden reportedly returned to Ontario to rehab a minor injury.

Oakville will host Streetsville on Friday.

Note: According to the OPJHL's website, Braden was traded to Oakville via Hamilton (OPJHL). It isn't entirely clear how Braden was moved from Drayton Valley to Hamilton.
Posted by BRP at 12:08 PM