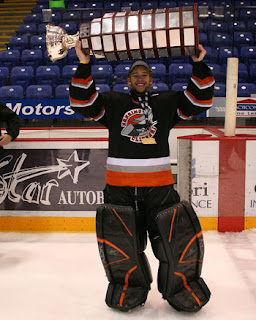 Michael Garman hoists the Fred Page Cup.
Congratulations to Michael Garman for being named the BCHL's Star Player for the first two weeks of April. During that period, which covered the last three games of the Coastal Conference Finals and the BCHL Championship series, Michael played 9 games and had a 2.37 GAA and stopped 91.2% of the shots he faced. Michael was also awarded a game 1st-Star and two 2nd-Stars during that stretch of games.

Photo courtesy of Jamie Penner.
Posted by BRP at 12:31 PM