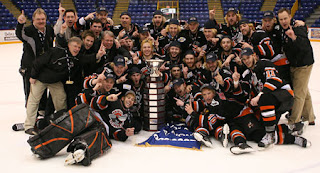 Congratulations to the Nanaimo Clippers for winning the Fred Page Cup last night in Vernon. Tyler Mazzei (RIT) scored with 34 seconds remaining in the game to give the Clippers their second Cup in the last 4 years. Nanaimo had tied the game in the second period on a powerplay goal by Joe Bitz, brother of Byron Bitz, the 2006-2007 Big Red captain. Michael Garman had another strong outing for the Clippers, stopping 26 shots, including a 2-0 breakaway. Joe and Mike Devin were keep off the scoresheet for the evening.

Next up for Nanaimo is Camrose, the Alberta Junior Hockey League champs. The Clippers and Kodiaks will play for the Doyle Cup. Camrose spent much of the season ranked 1st on the Canadian Junior A Hockey Leagues' national list. Currently, Camrose is ranked 2nd and Nanaimo is ranked 6th. The series begins in Nanaimo on Friday.

Photo: Nanaimo Clippers
Posted by BRP at 11:35 AM