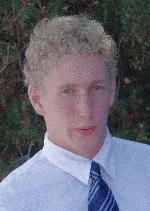 Justin Krueger (6' 2", 205), Winnipeg, MB, has committed to the Big Red. Justin is currently skating with the Penticton Vees of the British Columbia Hockey League, and has scored 7 goals with another 15 assists in 55 games for the Interior Division regular season champs. Justin was also an Assistant Captain for the German National Junior Team in recent pool play for the World Championships, in which Germany swept their pool and outscored their opponents 20-2.

Justin, in his first year in the BCHL, is considered a solid stay-at-home defensiveman and should fit nicely into Coach Shafer's system. Justin now appears in Chris Heisenberg's rankings where he's listed as the 16th-ranked defensiveman in the BCHL. Also of note: Justin's father, Ralph, played professionally in Germany and was the coach for Switzerland in the Turin Olympics, where the Swiss knocked off Canada 2-0. As much as I love Cornell's coaching staff, given that there isn't a volunteer assistant wouldn't it be interesting if Coach Shafer asked Ralph Krueger to spend a little time on staff. Ralph probably has a trick or two tucked in his skates.