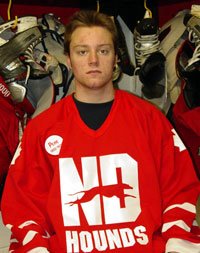 The regular season concluded last night with the Notre Dame Hounds falling to Yorkton 4-2. Blake Gallagher sat out the game, playing instead with the AAA Hounds, who defeated the Beardy's Blackhawks 7-3, behind Blake's hat trick.

As post-season honors begin to roll in, Blake should garner serious consideration for Rookie of the Year and for the All-Rookie team, despite having played fewer games than most Rookies. For the year, Blake led all Rookies in goals scored (24), power play goals (14), and was tied for the league-lead in game-winning goals (5). Additionally, Blake was tied for second in points scored -- while having played fewer games than any other Rookie in the top-10 -- and finished tied for sixth in assists (18). Among all players, Blake was tied for second in power play goals (14), and tied for third in game-winning goals (5).

Of course, before all of that there is more hockey to be played. The Hounds begin playoff play on Sunday when they host the Melville Millionaires.