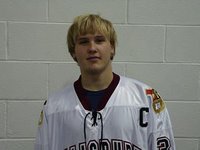 Alex Biega, reportedly a Harvard lean, is still considering Cornell, according to a recent interview with McKeen's Hockey.com. Biega (5'11", 191) is an intriguing prospect from Montreal. Considered a quick blueliner with offensive flair, Biega was a member of Quebec's Under-17 team in 2004 and currently attends Salisbury Prep. At Salisbury, he's the leading scorer among defensivemen and recently had a hat trick against Loomis Chaffee (how many d-men put up hat tricks?). Biega is the 2nd-ranked player in Massachusetts/New England on Chris Heisnberg's list and is listed as a B-rated player on NHL's Central Scouting board. In addition to Cornell and Harvard, Biega is also considering Boston College, Boston University, University of New Hampshire, University of Maine, and the University of Vermont. As a sidenote, whomever ultimately gets Biega may be getting a two-for-one deal as his younger brother Michael is considering joining his brother in 2007. Michael is currently the 3rd-ranked prospect in Massachusetts/New England on Heisenberg's list.

From the Things-that-probably-have-nothing-to-do-with-anything Department, here's some fun things to consider: Salisbury is coached by Dan Donato, brother of Harvard coach Ted Donato. However, Dan Donato attended Boston University and is a graduate of Catholic Memorial (school of recently committed twins, Joe and Mike Devin). Of course, Biega's Salisbury mate Nick Jaskowiak has already committed to Harvard for 2007. Oh, and one last thing: Salisbury's the Crimson Knights. Isn't Crimson just an ugly shade of Red?